Wiradjuri  mob of the Dubbo and Wellington area

Wiradjuri people are originally from the land that is bordered by the Lachlan, Macquarie and Murrumbidgee rivers in Central New South Wales. The name Wiradjuri means, 'people of the three rivers' and traditionally these rivers were the primary source of food for the Wiradjuri people. A number of customs were unique to the Wiradjuri communities with one of the most significant being the marking on trees to signify the burial place of a Wiradjuri pe

rson. Logging and land clearing have destroyed almost all of these burial markers, with one surviving tree trunk now on display in Bathurst Museum.

By the 1830s European settlement was moving beyond the coast following the fertile land alongside inland rivers and the Wiradjuri people would soon clash with settlers. Dispossession of land and the decimation of their traditional fishing areas spurred on retribution killings from both settlers and the Wiradjuri clans and these violent incidents are referred to now as the Wiradjuri Wars.

The gold rush of the 1850s introduced the most significant period of change for the Wirudjuri people. With the gold rush, inland New South Wales quickly became some of the most densely populated areas the state, and soon significant numbers of Aboriginal people were be lost to diseases introduced with these new settlers. Today there are large Wiradjuri communities in a number of inland centres including Condobolin, Griffith, Wagga Wagga and Parkes.

The South Western Slopes was traditionally Wiradjuri country, the largest Aboriginal language group in NSW. The Wiradjuri people travelled to the alpine regions of the South Eastern Highlands and Australian Alps bioregions for the annual summer feasts of bogong moths.

Wiradjuri means 'people of the three rivers', these rivers being the Macquarie, Lachlan and Murrumbidgee. For the Wiradjuri people, the three rivers were their livelihood and supplied a variety of consistent and abundant food provisions including shellfish and fish such as Murray cod. In dry seasons the food from the rivers was supplemented with kangaroos and emus hunted for their meat, as well as fresh food gathered from the land between the rivers, including fruit, nuts, yam daisies, wattle seeds and orchid tubers. 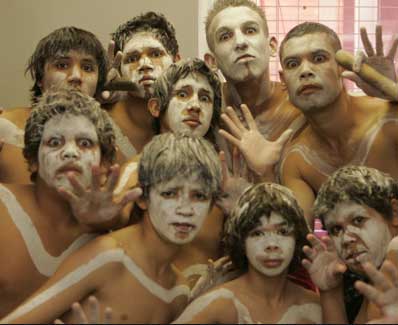 Evidence of the presence of the Wiradjuri people is common along the Macquarie and Lachlan Rivers in the northern half of the bioregion, but less so along the Murrumbidgee in the south, even though the Wiradjuri people lived on both sides of the Murrumbidgee. Surviving carved trees are numerous in the northern part of the traditional Wiradjuri range, whereas there are only 3 of these surviving near the Murrumbidgee . The reason for this is not clear, although the original presence of such carved trees is not necessarily indicated by their present-day distribution.

The Wiradjuri people generally moved around in small groups, using the river flats, open land and waterways with some regularity through the seasons as indicated by debris that has accumulated in these areas.

Clashes between the new European settlers and the local Aboriginal people were common around the Murrumbidgee and even further north, particularly between 1839 and 1841. These violent incidents have been termed the 'Wiradjuri wars' and involved removal of cattle and spearing of stockmen by the Wiradjuri people in response to killing of their people as well as loss of their fishing grounds and significant sites following invasion by the new settlers.

Settlers' concerns about the dangers of the Aboriginal people subsided during the 1840s as did the independence of the Wiradjuri people. By the 1850s, although corroborees were still being held on the hills surrounding Mudgee, the culture of the local Aborigines had been vitiated by disease, alcohol and mass European influx during gold rush periods.

Despite their tragic recent past, the identity of the Wiradjuri people of the South Western Slopes Bioregion remains robust to the present day, a high degree of marriage within the Wiradjuri community contributing to this strength of identity. Throughout the bioregion, the major Wiradjuri groups currently live in Condobolin, Peak Hill, Narrandera and Griffith, with significant populations at Wagga Wagga and Leeton and smaller groups at West Wyalong, Parkes, Forbes, Cootamundra and Young.